Based in the oral traditions of the African Diaspora, award-winning playwright Charlayne Woodard is a modern-day griot. NEAT is the story of Woodard's beloved Aunt Beneatha (Neat). As an infant, Neat is denied treatment at the local “white” hospital, resulting in her permanent brain damage. With her enormous love, Neat teaches Charlayne to cherish life through the turbulent 1960s and 1970s.

NEAT was developed at Seattle Rep, and subsequently produced at Manhattan Theatre Club, where it received the Irving and Blanche Laurie Theatre Vision Award and an Outer Critics Circle Award nomination. At Seattle Rep and the Mark Taper Forum, the play received a Backstage West Garland Award.

As an Actress, Ms. Woodard has performed in theatre, film and TV, winning many awards.

Ms. Woodard serves on the Council of the Dramatist’s Guild of America. She has served on the Boards of Directors of both the Manhattan Theater Club and LaJolla Playhouse; as well as an artistic trustee and fellow at the Sundance Institute. She completed a TCG/PEW Charitable Trust National Theatre Artist Residency Program Fellowship at Center Theatre Group and has taught at California Institute Of the Arts and University of Southern California. She trained at the Goodman School of Drama and received an Honorary Doctorate of Humane Letters from The Theater School at DePaul University (formerly the Goodman School of Drama). She is a lifetime member of The Actor’s Studio.

Ms. Woodard tells good stories, bringing them to life in ways that are poignant or sidesplitting. 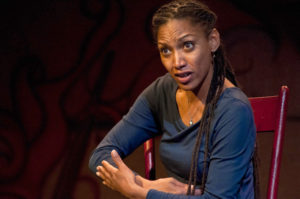